Rome – “If you hear a voice inside of you saying that you are not a painter, then, right then you have to paint and that voice will be silenced, only with work”.
Fatigue characterized by a sacred humility, but also understood as an ineluctable destiny, becomes a taut thread that, from the hands of Woman peeling potatoes inside one of the cold houses of Etten – black chalk, gray watercolor and opaque watercolor on laid paper, the fruit of the inexperienced hand of a Van Gogh 28 years old – accompanies the visitor to Palazzo Bonaparte in Vincent’s soul, teeming with everyday life and a boundless love for work and for the human being.
The almost sacred study of the work of the earth opens the exhibition path produced by Arthemisia, curated by Maria Teresa Benedetti and Francesca Villanti, which the space of Generali Valore Cultura dedicates from 8 October to 26 March to the artist with extreme sensitivity and a tormented life. 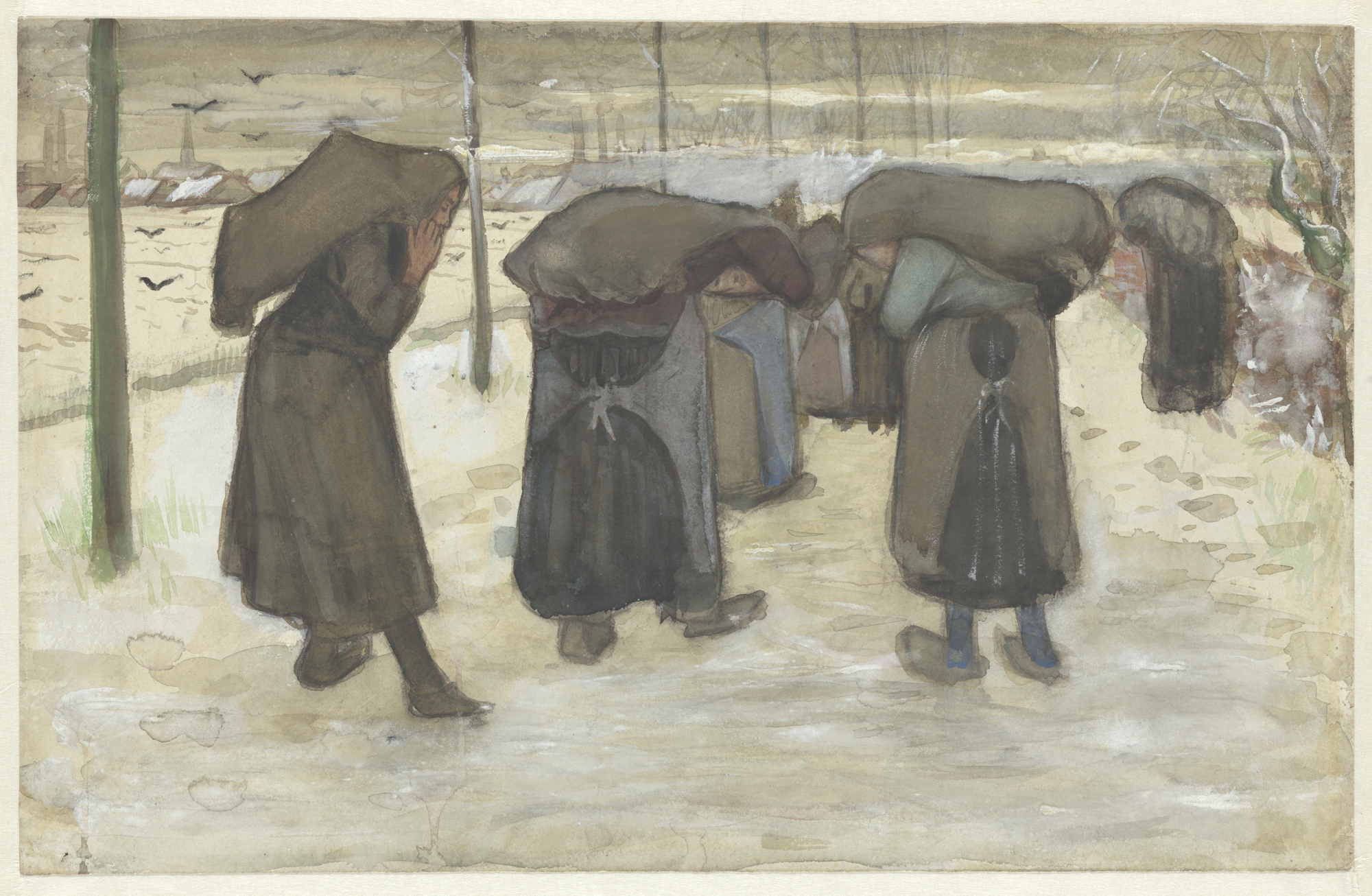 Vincent’s human and artistic life, told by his own words contained in the letters to his brother Theo, which characterize the extensive didactic apparatus of the exhibition, runs through the 50 works from the prestigious Kröller-Müller Museum in Otterlo, the great “house museum ”Born from the passion for art of Helene Kröller-Müller and which houses the largest number of works by the painter after the Van Gogh Museum in Amsterdam.
A chronological path, marked by the periods and places where the painter lived, from Holland to Paris, from Arles to St. Remy and Auvers-Sur-Oise, where he put an end to his tormented existence, leads the visitor, in an intense crescendo , from jobs like intimate friends Woman sewing and cat to the last dramatic Desperate old manof May 1890.

The realism learned by Jean François Millet and Charles François Dubign makes its way through the dark landscapes of youth from where sowers, potato pickers, weavers, woodcutters emerge, the woman intent on washing a pot and the one bent to collect wheat, and again Sien, the prostitute with the lost and poignant gaze or the wives of the Borinage miners crushed by the weight of the coal sacks, observed by Van Gogh as they advance through the snow.
And the guests of Palazzo Bonaparte, like Van Gogh, feel part of a world that lives in earthen huts.
We follow Vincent moving from Etten to The Hague, to Drenthe, to Nuenen, always looking for living testimonies of a world that has absolute value for him embodied in his figures. 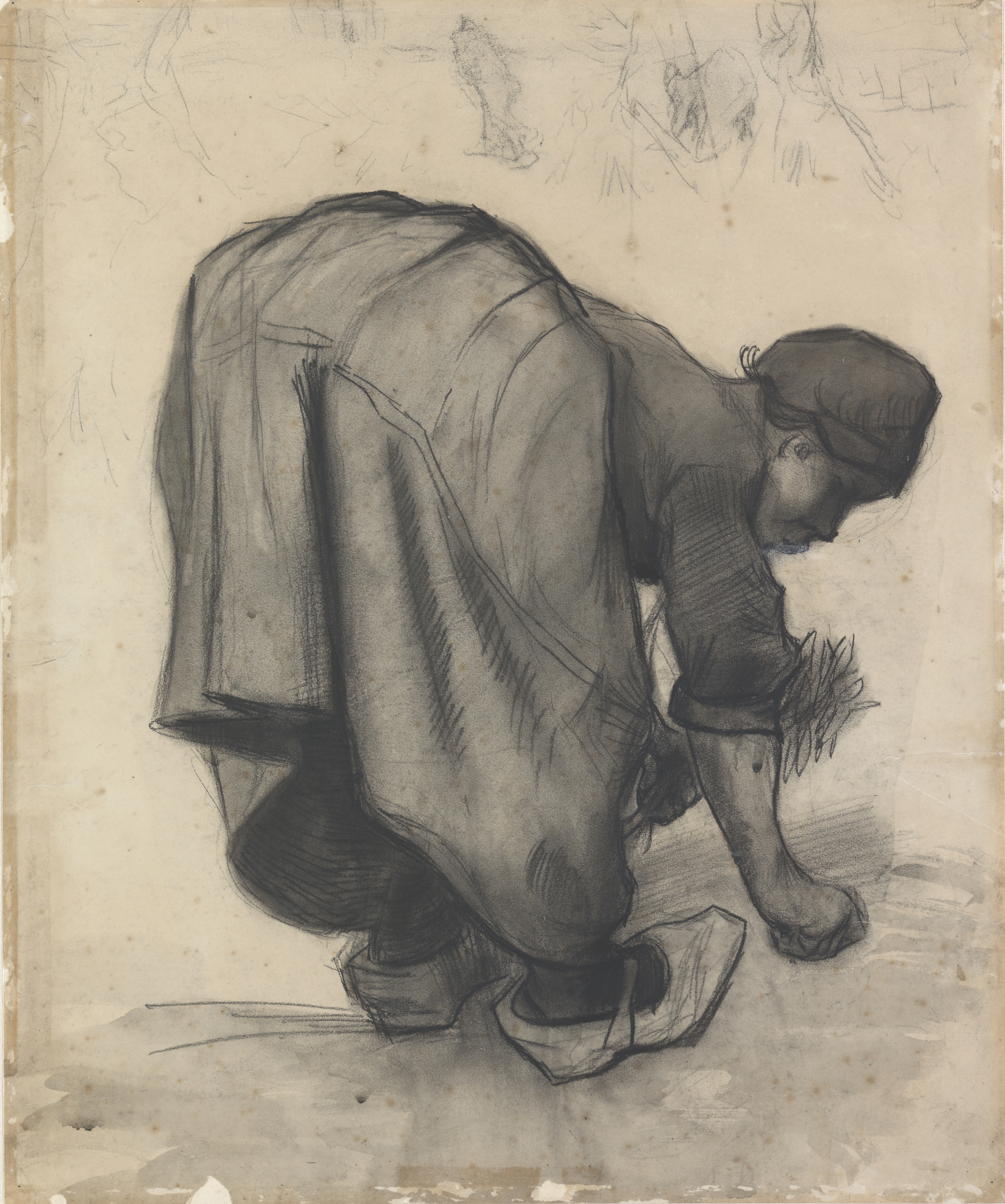 Still life with straw hatwhere Van Gogh takes Anton Mauve’s lesson in opening up to color his own, is only a timid signal that anticipates the chromatic explosion that will take place on the canvas during the Parisian period, experienced starting from February 1888. This careful search for color in the wake impressionist, with the conquest of a more immediate and chromatically vibrant language, emerges in the path through the vibrant and “photographic” cut of Interior of a restaurant, a tribute to the Impressionists who loved to represent the joyful life of modernity. It is from 1887 Lawn corner for which the artist reuses an old canvas that revealed, from an X-ray examination, traces of a woman’s head with a white cap and birds’ nests.
In his short stay in Paris, which lasted only two years, Vincent absorbs the vital artistic climate of the city, binds himself to artists such as Émile Bernard, Toulouse-Lautrec and Loius Anquetin, reserves for the great protagonists of Impressionism such as Monet, Degas, Renoir, Sisley and Pissarro the nickname of artists of the Grand Boulevard.
TheSelf-portrait on a blue background with green touches from 1887, on display in a room all to himself, and exhibited for the first time outside the Netherlands after the restoration which restored brilliance to the penetrating gaze proudly turned by the master to the viewer through quick strokes of the brush. 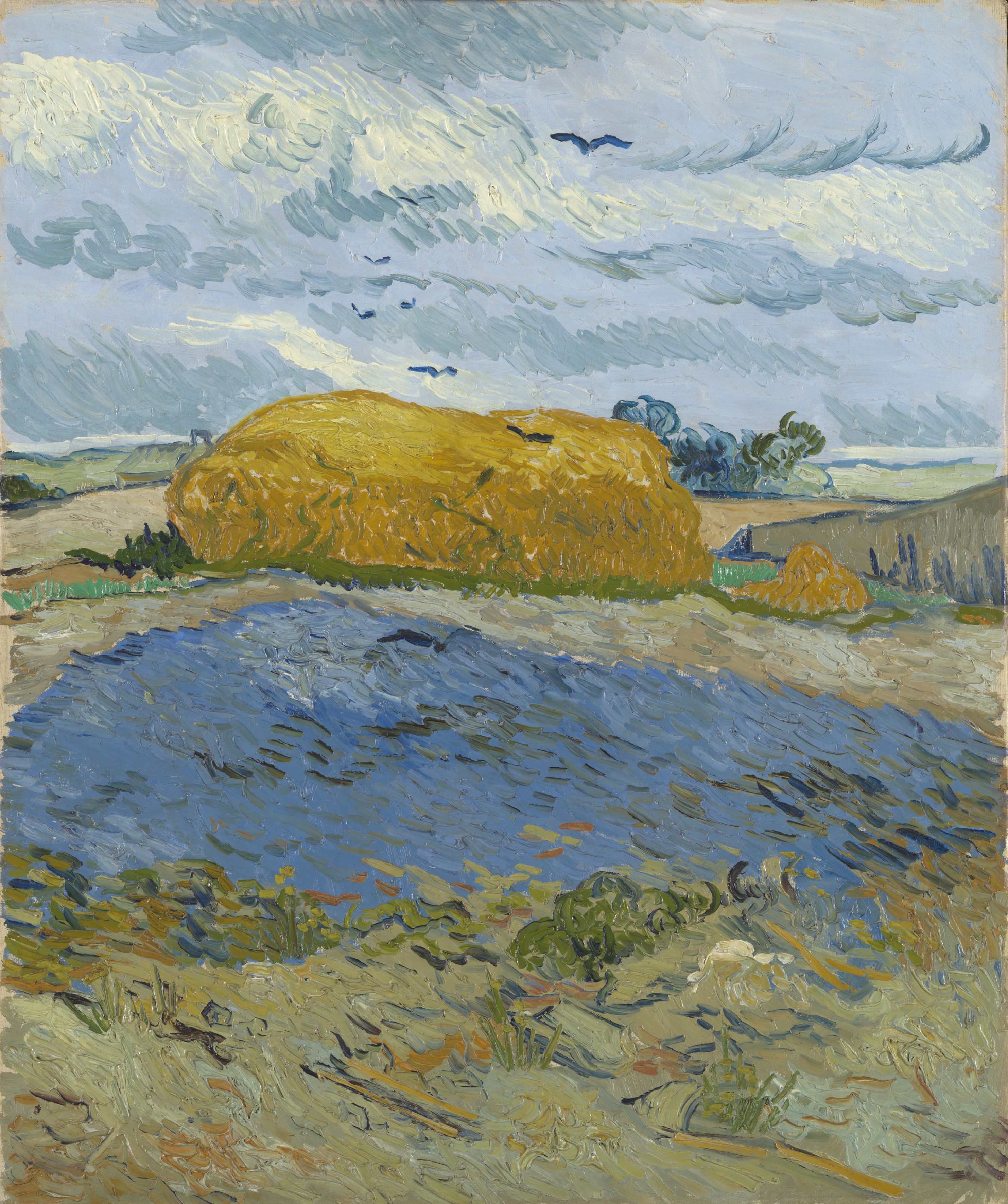 But it will be the immersion in the light and heat of the south, starting from 1887, to generate even greater openings towards chromatic excesses. Vincent resumes dreaming of symphonies of colors that can be associated with musical tones. Space is generated by color. Returns the image of the Sower. But this time the work, created in Arles in June 1888, is invaded by ancient gold and by unprecedented color combinations with which the artist wants to express joyful sensations. Van Gogh descends into the abyss, but is able to rise suddenly and vehemently.
Vincent’s journey to Palazzo Bonaparte continues and, with his, also that of the visitor. Now the painter feels that such an expressive sphere can only be reached through a metaphysical use of color.
His first attack of madness, in the asylum of Saint-Paul-de-Mausole, strikes him while painting in the fields on a windy day. And so Garden of the hospital in Saint-Rémy (1889) takes on the appearance of an intricate tumult, while the rocky mountains of the Alpilles become swirling tangles where the violent brushstrokes become an expression of the painter’s mood. In the tumultuous universe of Ravine with convulsive shapes that seem to swallow all hope, Van Gogh projects his torments that become inconsolable in the last cry for help entrusted to the Desperate old man (1890) which closes the exhibition. 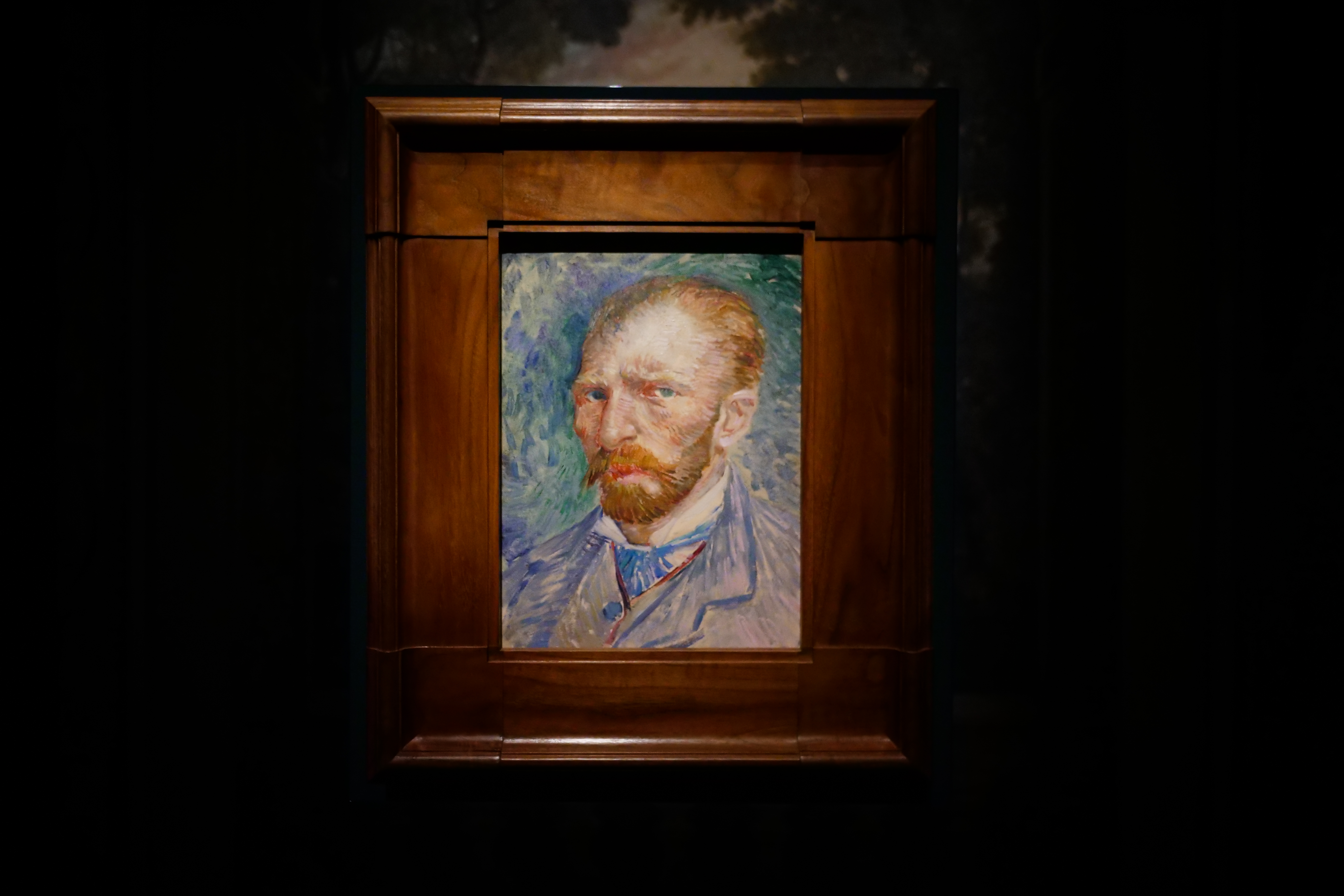 Installation of the Van Gogh exhibition. Masterpieces from the Kröller-Müller Museum

Alongside the works of Van Gogh, the itinerary embraces, in the first section dedicated to Helene Kröller-Müller, who entrusts art with the task of leading society towards the future, some masterpieces from the Dutch collection such as Portrait of a young woman (The Madrilenian) by Picasso, In the café by August Renoir e Atiti by Paul Gauguin.

That “big bristly dog” that enters “the room with wet paws” barking loudly, as Vincent wrote about himself in 1885 in a letter to his brother Theo, will no longer bother. He made his glorious entry into the ages by conquering that same humanity that he had placed at the center of his immense masterpieces, to drag us over a century later, into the magical dream of a starry night.

Read also:
• In the world of Van Gogh. The masterpieces of the Kröller-Müller Museum arriving in Rome