Spice – An unexpected Inferno, where the light and colors of the Mediterranean take the place of the gloomy shadows of the underworld. And then Minos, Achilles and Polissena to replace Paolo and Francesca, fantastic characters and metaphysical landscapes to populate Purgatory, and finally the soft, ethereal and evanescent contours of Paradise, the last kingdom, placed “neither above, nor below, nor below right, nor on the left but exactly in the center of the chest of the man who has faith”.
It is Dante’s Divine Comedy filtered through the sensitivity and imagination of Salvador Dalì, in fact a new parallel journey into the psyche and suggestions of the artist from Figueres who finds himself confronted with Dante Alighieri’s masterpiece and with himself.
To welcome the one hundred color woodcuts by Dalí, which tell and reinterpret Dante’s journey in an original and revolutionary way Divine Comedythe fourteenth-century masterpiece whose first foreign language translations were in Castilian and Catalan, the Firmafede Fortress of Sarzana will be from 26 November to 5 February (Spice).
The Medici complex of the Sarzanese walls will be the setting for the exhibition Salvador Dali. Dante and the journey of genius, curated by Gina Ingrassia, promoted by the Municipality of Sarzana and organized by Comediarting.
The town that hosted the great poet at the beginning of October 1306, when he stayed there in the role of “ambassador” of peace to successfully settle the long negotiation between the Malaspina dello Spino Fiorito and the Bishop Count of Luni, now makes homage to his most famous work through an excursus on Divine Comedy and a compelling dialogue between two geniuses of culture united by an interpretation of the world that opens up to suggestive metaphysical scenarios and visionary worlds, albeit distant in time and space. 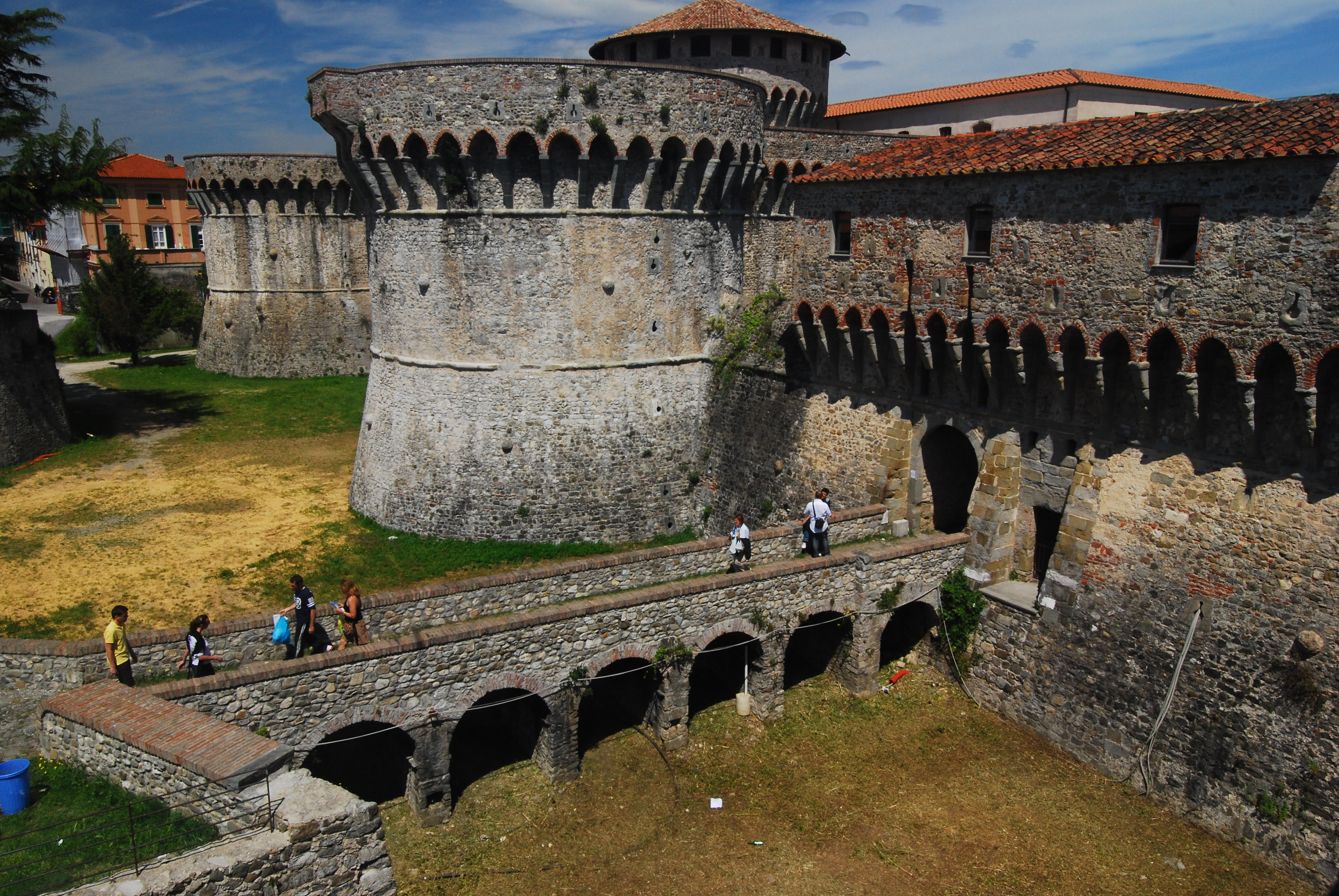 The Fortress of Sarzana | Courtesy of the Municipality of Sarzana

The one hundred color woodcuts are the result of an ambitious project with a long and articulated history. In 1949 the Italian government, in view of the celebrations for the 700th anniversary of the birth of Dante, which would have taken place in 1965, commissioned Dalí a monumental work which included the illustration of the Divine Comedy. But this project, due to ups and downs and reasons independent of the artist’s will, underwent continuous variations, never reaching completion in the hypothesized form. The watercolors created by Dalí finally led to the creation of one hundred woodcut tables, the result of a further five years of work with the involvement of some of the best master engravers of the time. This colossal work recounts Dante’s work while representing at the same time the synthesis of the personal and artistic journey of the surrealist genius.

If in the exhibition in Sarzana the visitor expects to trace a punctual correspondence between images and Songs, he will be disappointed, since Dalí stages a “new” Divine Comedy, selecting on the tables the episodes closest to his personal history and the characters who tease his imagination and which belong in some way to his psychic universe. The exhibition itinerary follows the correspondence between image and song elaborated by the German scholar Wolfgang Everling. And so from Hell illuminated by the dazzling light of the Mediterranean, the public is ferried among the fantastic characters who inhabit the thirty-four tables of Purgatory, the “middle world”, understood as a bridge between the dreamlike and surreal atmospheres of Hell and the celestial iconography of Paradise. In this universe the artist adopts a pictorial register which bears witness, in the forms and work of his protagonists, to the complex effort of “climbing”. 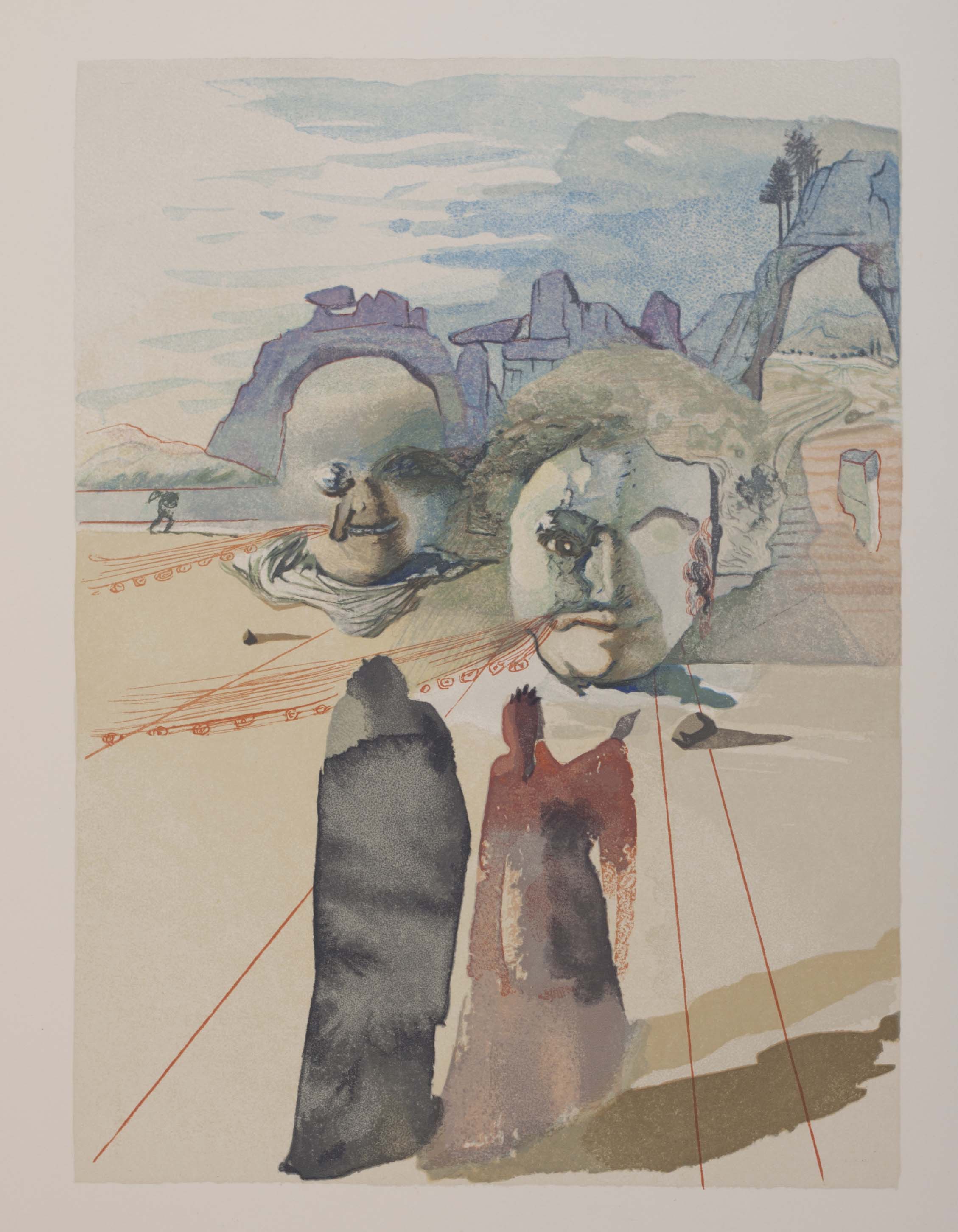 Salvador Dalì, Purgatorio, Manfredi, “blonde was and beautiful and of kind appearance, but one of the eyelashes had divided a blow” © Salvador Dalí, Gala-Salvador Dalí Foundation by SIAE 2022

However, the great evocative power of the images emerges in Paradise, the last realm, placed by Dalí “neither above, nor below, nor to the right, nor to the left but exactly in the center of the chest of the man who has faith” where it emerges, again once, the metaphysical and psychological conception of Comedy. In his journey in the footsteps of Dante, Dalí also retraces his artistic evolution in full, gathering together the entire iconographic baggage populated by hangers, rhinoceros horns, flying bones, soft objects, operating a synthesis of that multifaceted inner universe which he pours into his art where mysticism and surrealist atmospheres converge, the liquefaction of time and space, references to classical art and the masters of the Renaissance. In this suggestion, the eye gets lost in the brightness of the color and in the evanescence of the images to find itself in the otherworldly worlds created by Dante, giving us a new and unexpected universe in which to immerse ourselves.
“The added value of the exhibition Salvador Dali. Dante and the Journey of the Geniusbeyond the pure cultural value and its undeniable contribution in terms of beauty – explains the curator Gina Ingrassia – lies in the possibility of comparing, through the dialogue between two extraordinary figures, different ideas, visions and philosophies, highlighting more what differences and testifying through this the topicality of their work”.

To provide the public with an interesting term of comparison between different cultures and figurative languages ​​in relation to the visual interpretation of a literary work, eleven plates will be on display, including etchings and monotypes, part of a three-handed work, conceived in 1999, and which involved three well-known illustrators on a project by the Nuages ​​gallery and publishing house. In charge of translating the canticles of the Divine Comedy in order to give the prints a precious edition of Dante’s poem available today, Lorenzo Mattotti and Jean Giraud (aka Moebius) dedicated themselves respectively to the illustrations of Hell and Paradise, while the American Milton Glaser illustrated the songs of Purgatory. Nine of these tables, characterized by a melancholy sweetness, are included in the exhibition itinerary.
The exhibition will be open every day, except Mondays, from 10 to 13 and from 15 to 19.

Read also:
• The Theater-Museum of Figueres: a Dalì dream